We have seen an increase in Parvo Cases…Please help us spread the knowledge.

Parvo, or canine parvovirus (CPV) infection is a relatively new disease that appeared for the first time in dogs in 1978.

Unvaccinated puppies are at very high risk of contracting this serious and often fatal illness. 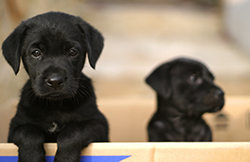 How does a dog become infected with parvovirus?

The main source of the virus is from the feces of infected dogs. The virus begins to be shed in the feces just before clinical signs develop and shedding continues for at least 10-20 days. Susceptible dogs (especially unvaccinated puppies) become infected by ingesting the virus. After ingestion, the virus is carried to the intestine where it invades the intestinal wall.

CPV is very stable in the environment and is resistant to the effects of heat, detergents, alcohol, and many disinfectants.

Due to its environmental stability, the virus is easily transmitted via the hair or feet of infected dogs, or on shoes, clothes, and other objects contaminated by infected feces. Direct contact between dogs is not required to spread the virus. Dogs that become infected with the virus and show clinical signs will usually become ill within six to ten days after exposure.

Can parvo be prevented?

Yes! The best method of protecting your dog against CPV infection is proper vaccination. Puppies receive a parvovirus vaccination as part of their multiple-agent vaccine series. It is recommended to be given at 8, 12, and 16 weeks of age. In some high-risk situations, veterinarians will give the vaccine at two-week intervals, with an additional booster administered at 18 to 22 weeks of age. After the initial series of vaccinations, boosters will be required on a regular basis.

Owners should avoid taking puppies to pet stores, doggie day care, kennels, dog parks, or other places that dogs frequent until the puppy has its complete set of parvovirus vaccinations.

What are the clinical signs of parvo?

The clinical signs and symptoms of CPV disease include severe vomiting and diarrhea. The diarrhea often has a very strong smell, may contain lots of mucus and blood.  Dogs often exhibit a lack of appetite, marked listlessness and depression, and fever. Many dogs may not show every clinical sign, though vomiting usually begins first. Parvo may affect dogs of all ages, but is most common in unvaccinated dogs less than one year of age. Young puppies less than five months of age are usually the most severely affected, and the most difficult to treat.

How is it diagnosed?

There is a simple in-clinic test for CPV that will screen for this disease. Occasionally, a dog will have parvovirus but test negative for virus in the stool. Fortunately, this is an uncommon occurrence.

Can parvo be treated successfully? 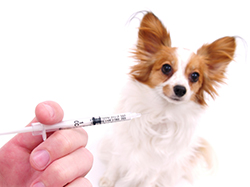 Parvovirus causes loss of the lining of the intestinal tract, and causes suppression of the bone marrow leading to low white blood cell counts. The intestinal damage results in severe dehydration (water loss), electrolyte (sodium and potassium) imbalances, and infection in the bloodstream (septicemia). If septicemia develops, the dog is more likely to die.

Most dogs need to remain hospitalized for 2-5 days, although some dogs require even longer hospitalized care.

The mainstays of therapy include supporting with IV fluids, antibiotics, and anti-nausea medications while the puppy weathers the viral storm.  The first step in treatment is to correct dehydration and electrolyte imbalances. This requires the administration of intravenous fluids containing electrolytes.  Antibiotics are given to prevent or control septicemia. Additional drugs are used to inhibit the diarrhea and vomiting that perpetuate the problems.   Most dogs need to remain hospitalized for 2-5 days, although some require even longer hospitalized care.  The average cost of hospitalization is $500-$1200+.

What is the survival rate?

Most dogs with CPV infection recover if aggressive treatment is used…

Most dogs with CPV infection recover if aggressive treatment is used and if therapy is begun before severe septicemia and dehydration occur. With proper care, the survival rate is 80-95%.  For reasons not fully understood, some breeds, notably the Rottweiler, Doberman pinscher and English springer spaniel, have a much higher fatality rate than other breeds. In most cases, puppies that have not improved by the third or fourth day of treatment have a poor prognosis.

Is there a way to kill the virus in the environment?

The stability of the CPV in the environment makes it important to properly disinfect contaminated areas.

“A solution of 1/2 cup of chlorine bleach in one gallon of water (133 ml in 4 liters of water) will disinfect food and water bowls and other contaminated items.”

A solution of 1/2 cup of chlorine bleach in one gallon of water (133 ml in 4 liters of water) will disinfect food and water bowls and other contaminated items. It is important that chlorine bleach be used because most disinfectants, even those claiming to be effective against viruses, will not kill the canine parvovirus.

Does parvovirus pose a health risk for me?  How about my cats?

Currently, there is no evidence to indicate that CPV is transmissible to cats or humans.